In October I had so much fun! It was a big birthday year for me and as my big day approached I decided that what I really wanted to do was get behind the wheel of EV so I could make some informed decisions. (That was my excuse anyway. 😁)

How did I book the electric vehicle test drives?

It was all very straightforward. The Tesla test drive was the easiest one to get. It just involved a few clicks on their website and the date was confirmed. I had a choice of several dates and times and I quickly got an automated confirmation. I was allocated a one-hour test drive and when I got to the garage after an initial driver’s licence check I was given the Tesla Model 3 to take out for a spin on my own. 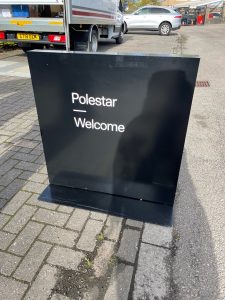 The Polestar was also easy to get my hands on. I booked the Polestar test drive online and had to verify my ID online before arriving at the location. That was really straight forward too. The test drive was slightly different in that it was a group event. There were 5 Polestars and 4 people all test driving the cars at the same time. We went out in a convoy and followed a set route that was pre-installed on the sat nav. I was a straggler so got separated from the group but it was fine. I just followed the directions in a giant loop. It took around an hour to get back to our start location. I am quite a nervous driver but the route was really easy to navigate and the car a complete joy.

The Mustang Mach-e I booked direct at my local Ford dealers and had the car for around 30 minutes and the same with the Kia EV6.

Is it different driving an electric vehicle?

Yes!!! My first test drive was the Tesla Model 3. Friends had told me that I wouldn’t need to use the clutch or the brake whilst driving the Tesla but I couldn’t understand how that was possible. Let me tell you it is!

I was on a slight slope when I get into the Tesla. The Tesla rep told me that with the activation card in the vehicle the car was on. It didn’t sound like it was on!!! She advise me to lightly touch the brake, release and then put the car into drive mode. I did this but instantly put my foot back on the brake. There was no need. The car automatically held itself still. All you need to do is accelerate and go. Until you accelerate the car holds itself without you doing anything. You don’t need to release a hand brake, in fact, there isn’t one! 🤯

I was quite nervous and couldn’t quite believe that the car would automatically hold on a slope. My mind was slightly blown but it worked.  The last thing I wanted to do is roll back and bump the shiny new Tesla into the wall but the car held firm. As I pulled away the acceleration was quite quick and I must admit I started to laugh! I am not a car person but it really felt fun to drive.

At my first set of traffic lights, I took my foot off the accelerator and the car very quickly responded. Almost like when your time runs out on the dodgem cars in the fairground. The car came to a stop without me needing to apply anything!

The test drive continued to be a joy to drive as I pulled off the M4 onto some smaller country lanes. It was so different not having to change gear or sometimes even break that I could see a Tesla appealing to so many people! My mum who would love an automatic I’m sure would be delighted to drive one. A Tesla is better than an automatic it’s like a giant iPad/dodgem car!

When I got back to the base I stopped and pushed up the lever to put the car into park and that was it.  No need to apply a hand brake. No locking the car. I just walked away with the little card the rep had given me and the car locked itself! WOW PLUS NO EMISSIONS! 💚💥

This style of driving where you only really need to remove your foot from the accelerator is called one-pedal driving. The Polestar and the Mustang have one-pedal driving but I don’t think the EV6 does. You can change the driving style to remove this. I think for older folk like me who might find one pedal driving just too much of a change you can make the car respond like a traditional car where the car creeps forward if you take your foot off the brake. Before you take a test drive I would ask the sales advisor which mode the car is in. I recommended you at least give one pedal driving a go!!

Which electric vehicle would I choose out of the 4? 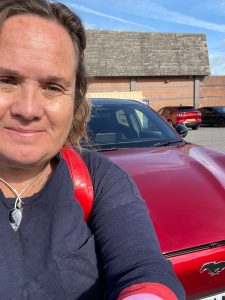 I think they are all pretty great!! All 4 cars are 100% electric with zero emissions. I think it depends on your needs and preferences when choosing an EV. I LOVE tech and so Tesla won it for me. It’s just so simple and futuristic. Plus there are so many updates constantly coming from Tesla all via air updates that I don’t feel as excited about the other 3 cars I test drove BUT they are all fantastic cars!

The Mustang Mach-e would be my second choice. It’s really solid, very comfortable and with really easy functions inside the car, it just beat the Polestar to second place. The KIA EV6 only came last as it doesn’t seem to have one-pedal driving. The sales rep had no idea what I was talking about and the dashboard is very busy! There are lots of stripes.

What’s the verdict? Should I buy an electric car?

Without a shadow of a doubt if you are about to buy a new car it’s really worth considering an electric vehicle. If you have your own drive then charging isn’t an issue. You can look at one of the 4 tariffs suitable for EV charging with Octopus Energy. For under £3 you can fully charge a Tesla Model 3 which will give you a range of over 200 miles.

If you don’t have a way of charging your electric vehicle at home then I think out of the 4 electric vehicles I test drove I would opt for the Tesla as it has its own network of chargers. In saying that at the moment Tesla is opening up some of their charging stations to other makes of electric cars. So that may not be such an issue in the future. Plus you have lots of charging options many of which offer free charging such as at supermarkets.

I didn’t plan to buy an electric car. I try and get the most use out of everything I buy. An electric car is great but the production even causes a bigger carbon footprint. If you can cycle, take public transport or walk even better BUT my car is 14 years old and I have had it from new.  It’s currently costing me so much in repairs I have decided to make the leap! I will buy my electric vehicle in 2022.  Like everything else I own I’ll really make sure I get every ounce of use from it.

I am quite nervous about splashing out on a new car but I want to make the switch to an electric vehicle for the planet and I have had so much fun trying out the one-pedal driving.  Fingers crossed in 2022 I will be able to do some fun reviews and blogs as I start my EV journey.