When switching energy suppliers we wanted 100% renewable energy because we wanted to reduce our environmental impact. We had two green energy companies in mind both offering renewables. I could understand how my electricity could be renewable. The energy provider simply generates green energy and plugs it into the national grid. It replaces every kWh of energy I take from the grid with a kWh of renewable energy. Quite straight forward BUT how do they make my gas supply renewable?

The simple answer is they can’t. There is a carbon-neutral gas called biogas. Biogas is made by a process called anaerobic digestion. In the UK, however, there simply isn’t enough AD plants to generate the supply needed. One of the two energy suppliers we had selected stated it supplied 10% biogas to your gas fuel mix and 90% natural gas, the other 0% but they converted it to electricity. In order to offset your use of natural gas, they both invested in carbon reduction projects.

Here’s a map of all the AD plants in the UK.  I found it really interesting. My local authority seems to take our food waste and create biogas which I assume they then use locally. Some local authorities run public transport on it.

I found this video to be very helpful in understanding the process of generating biogas.

HOW WE HAVE CHOSEN TO USE BIOGAS

We decided to switch to Octopus Energy. They don’t supply biogas directly to their customers.  Instead, they produce and then burn biogas to generate electricity.  Octopus then sends this to the national grid.   The anaerobic digestion makes up 49% of Octopus’ renewable energy.  This allows them to produce energy even when the sun is not shining or the wind not blowing.  Octopus Energy offsets your gas use with carbon reduction projects. In their mix of waste, Octopus Energy does not include meat food or farm waste in their AD process, unlike some other suppliers.

So quite simply biogas can be made but not in large enough quantities. Well not yet anyway. The best we can do, if we need to use gas, is to switch to a green energy company who makes the best use of the biogas available and offsets any natural gas consumption with carbon reduction projects. 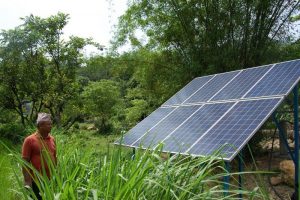 RW’s clean energy hubs provide whole new careers and income streams in the communities they work with and return agency to local people and businesses who’ve been constrained by unreliable, high-polluting energy sources.

If you decide to switch to Octopus Energy you will get £50 credit on your first bill by using our link.