It is a valid question. Who do you trust to save you money? Personally, if it was a choice between Martin Lewis, from Money Saving Expert, or the Government I would without doubt pick Martin every time. He has saved me thousands and I even got a cashback from a mis-sold endowment mortgage.  Yet I ignored him for years when he went on and on about switching energy provider.  Why? I didn’t think it was worth the effort for a few pounds. I just dismissed his advice and it appears I was not alone.

A lot of people are loyal to the Big Six energy provider, as was I, and are afraid to try a smaller supplier. I was with British Gas for ten years. They offered me very little incentive to stay but I did.

The government I fear is adding to this misplaced loyalty by the introduction of the energy price cap. Customers feel I suspect, that as energy prices have been capped they are not overpaying for their energy but they are as explained by Martin Lewis this week.

The price cap came into effect on 1st April this year and was set at £1254.  The price cap will last for six months and Martin feels this has stopped people switching.  Consumers believe the price must be reasonable as it is capped BUT prices have dropped. Octopus Energy reduced its prices, as an example, from the 1st May 2019.   Some people will always pay more but who are the acceptable victims who should be allowed to overpay, Martin, asks?

Are you an acceptable victim?

Martin is right people who don’t take on-board advice and don’t even attempt to research will pay more but no one should overpay for energy. It is a valuable commodity we just can’t live without. The government price cap has added to the issue as people feel they can’t be taken advantage of but they quite obviously can.  No one should overpay for energy especially when it offers no additional benefits. It just adds to the profits of the supplier.

Fast forward to the 21st century

We have gadgets galore. iPhones, ipads, apps, smart TVs, doorbells which you can answer even when you’re miles away, and yet the biggest commodity which all these run on we are ignoring.

We have an abundance of wind, water, and sometimes sunshine in the UK. surely we can use this to power and technology to run our homes and reduce energy bills?  The answer is you can. Even without buying solar panels you can reduce your bill and take advantage of 100% renewable energy.

The planet is in crisis, we have people protesting on the streets to affect climate change and we have the technology as individuals to make the biggest impact on reducing our own carbon footprint by switching to 100% renewable energy.  We can wait for the government to act on both climate change and energy pricing but we can jump ship and go green at home. It takes just two minutes to switch to a new provider.

There are several green energy suppliers in the UK most of whom would give the big six a run for their money in terms of pricing. We chose Octopus Energy as we loved its approach to renewables. They invest heavily in technology and not only offer cheaper tariffs than the big six but they reward their customers for using energy when there is less demand on the national grid making it even greener.

We opted for a super green tariff where we pay slightly more than their standard tariff to offset our gas supply.  They invest in carbon-neutral projects such as Renewable World.

So how can Amazon Alexa save you money?

I asked who would you trust to save you money, the government, Martin Lewis or Alexa?  How does Alexa fit in?

Octopus Energy has teamed up with Amazon to become the first energy company to provide voice automation with Alexa to provide real-time energy pricing.

If you’re on the Agile tariff you will be able to use Amazon Alexa to find out when energy is at its cheapest.   (The Agile tariff tracks energy prices throughout the day. )  So using the voice automation provided by Amazon you could ask Alexa when prices are cheapest.

Based on this information you could turn on, for example, your washing machine or charge your devices when energy is at its cheapest. You can even automate this too!

I haven’t switched to Agile yet as we are on Super green but it may well be on the cards for us later this year. To go for the Agile tariff you need a SMETS 2 smart meter which we are waiting to roll out nationally.

Who do WE trust?

Without a doubt Martin Lewis. We also now, after almost a year with them, trust Octopus Energy and their CEO Greg Jackson.  Mr. Jackson personally resolved an issue we had when I emailed him several months ago. The firm is very transparent and open about their prices which is amazingly refreshing and more importantly, they are saving people money and helping to reduce the impact of fossil fuels on the environment.

How can I get a free cuddly Octopus from Octopus Energy? 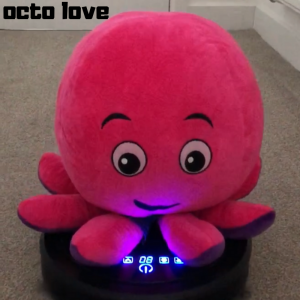 Once you have signed up to Octopus Energy if you want to get your hands on a free cuddly Octopus they will send you one in the post, although it can take a few weeks depending on stock. Her name is Constantine. (I am not joking)

If you would like to borrow a thermal imaging camera to find out where the heat is escaping from your home or workplace you can request one here.

Also, don’t forget you get a chance to win a cash prize when you enter your meter reading with “spin to win.”

The Green Friday prize draw to win a funky green electric VW Beatle has now ended but keep an eye on their social media for more competitions. (The big competitions usually appear in your Octopus Energy dashboard)

Once you have chosen to switch to Octopus Energy as a new customer using a referral link, you’ll be given £50 credit on your first bill and your own personal referral code to share with friends and families. For every person that switches with your code, you both get £50 credited towards your next bill. It takes just two minutes to switch and your code is effective immediately. (I would be delighted if you use mine to get you started, thank you!)